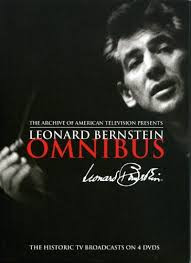 Sorry but this item is currently unavailable.

Please check back at a later stage.

Note: These DVDs are Region 1.

From the 'Time Out New York' review: "For an indication of what sort of cultural clout Leonard Bernstein commanded during his mediagenic 1950s heyday, one need only look to the fan mail he received after appearing on the TV series Omnibus." This 4-DVD set include 7 episodes of the historic televisions series "Omnibus" hosted by the legendary Alistair Cooke. Featuring performances as well as entertaining and engaging presentations on subjects ranging from conducting to musical theater, presented in Leonard Bernstein's inimitable style.