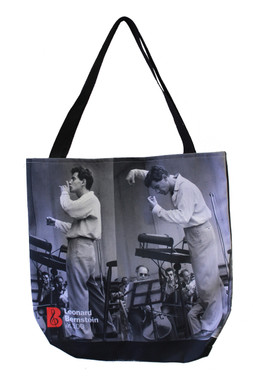 Ruth Orkin took many photographs of Leonard Bernstein during the 1940's, and became lifelong friends with him. Bernstein even spoke at Ruth's memorial in 1985.  Orkin took these photos of Bernstein conducting at Lewisohn Stadium in 1947, which was located at the City College campus. It was where the NY Philharmonic practiced over the summer, and anyone could attend rehearsals for 25 cents.

Ruth loved classical music and played the cello, guitar and piano and went to the stadium on her own without any assignments.  She also went to Tanglewood, Massachusetts where the Boston Symphony Orchestra performed over the summer, and photographed Bernstein there and many other musicians who were in residence.

Digitally printed on both sides.

Lightweight, it can be folded to easily store inside another bag until needed. When ready for use it can hold everything and be used as a day bag, or shopper tote.

Poly poplin material with non-woven laminate inside, cotton handles and image on both sides.